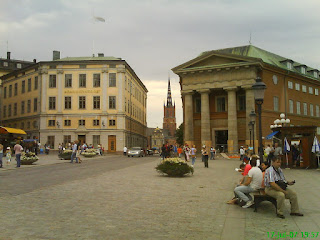 Copenhagen, the capital city of Denmark, is located on the east coast of the Danish island of Zealand, the largest of Denmark’s 500 islands. The whole country is almost the same size as one half of the area of Maine. The name of Copenhagen means ‘Merchant Harbor’ and it is believed that the City was founded in 1167 by Bishop Absalon, at the spot where fishermen and merchants gathered to market their goods.

With a population of approximately 1.7 million people, Copenhagen is Scandinavia’s largest city and the center of Danish government, administration and finance. Denmark is a constitutional monarchy with the longest, continuous royal blood line in Europe, spanning some 400 years. It has a parliament and is very advanced, both politically and socially, with a high standard of living and comprehensive social security system.

Copenhagen is an important shipyard and design center, and the home of Denmark’s leading export, beer, with both the Carlsberg and Turborg breweries being located here. Other important exports include; butter, biscuits and bacon.

Copenhagen is also an elegant city, rich in history and tradition, which delights visitors with its blend of historical old world charm, majestic architecture, friendly citizens and modern efficiency. This special combination serves to make the City on e of the top tourist destinations in Europe, adding greatly to the local economy.

In 1157 Copenhagen was a small fishing village called Havn (Harbor) and in 1167 Bishop Absalon built a fortress to protect the port. It soon developed into an important trading center due to its position at the entrance of the Baltic, a vital trade route in medieval Europe. Queen Margrete I established the union of Denmark, Sweden and NOrway in 1397 – the Trekronnen Kingdom, the largest Viking Empire in history, which was ruled from Denmark. Copenhagen became the capital city in 1416.

The reign of Christian IV (1588-1648) saw industry and commerce flourish and Danish trade was extended to the East Indies. Many of the finest buildings in the city were built at this time; the Stock Exchange, Rosenborg Castle and the Round Tower all remain to this day.

In 1660 Copenhagen became a free city with residents being given the same rights and privileges as the nobles. Major fires in 1728 and 1795, as well as attack by British Naval forces in 1801 and 1807, destroyed large parts of the City.

The mid-19th century was Denmark’s golden age, the ars flourished and social progress took place. Neutral in World War I, Denmark was occupied for 5 years by German forces in World War II, but the underground put up a heroic resistance and the Danes helped some 7,000 Jews to escape to Sweden. Fortunately, the City escaped large scale destruction and after the War, Denmark entered NATO (1949) and in 1972 became a member of the European Economic Community.

It is located on the waterfront near the ship’s berth. This charming bronze stature was commissioned by Carlsberg Brewery magnate, Carl Jacobsen, in honor of Copenhagen’s famous author; Hans Christian Andersen.

It contains relics of the Resistance Movement from 1940 to 1945.

It has been the residence of the Danish Royal Family since 1749. It consists of a large square, encircled by four uniform rococco palaces. The changing of the Guard take place in the Square every day at Noon. Three of the Palaces are not open to the public.

It is located on Oster Voldgade, was built between 1606 and 1617 by Christian IV. Its name means ‘Castle of The Roses’ and it is an ornate renaissance palace. Inside are fine interiors with extensive collections of art and furnishings and in the basement, the magnifiecent crown jewels.

It is situated at Ny Vestergade 10, is the biggest museum in Scandinavia, with exhibits ranging from Prehistoric to Middle Ages, with a special emphasis on Danish history.

Copenhagen’s famous amusement park, the heart of the City, loacated across from th Town Hall. Established in 1843, it is a large cultural and entertainment center with gardens, fountain, lakes, bands, as many as 38 restaurants, and a fun fair.

It contains a vast collection of ancient art with may Greek and Roman statues and a collection of 19th and 20th century art, including works by Gaugin and Van Gogh. It is located on Hans Christian Boulevard near Tivoli Gardens.

There is little or no opportunity to bargain in Denmark.

Tipping is not usually expected in Denmark.

The Danes are probably best known for their open-face sandwiches. There are also many other kinds of fine sandwiches in Denmark. Typical of Scandinavia the “Cold Table”, Buffet-style lunch is also very popular, consisting of may types of fish and seafood, particularly herring which may be pickled, marinated or fried, a range of cold meats and pates and even the odd “hot” dish such as meatballs. The world-renowned “Danish” pastry is very common and oddly enough referred to as “Wienerbrod” ( Viennese pastry)

The Danes are famous for their Beer, with over 50 different brands, the two most widely recognized brewers being; Carlsberg and Tuborg. Aquavit, a potato based liquor, flavoured with caraway, is a favorite of the locals, in fact, througout Scandinavia.

The main shops are located along Ostergade, Amagertorv, Vimmelskaftet, Nygade and Frederiksberggade, effectively all one street, an area referred to as “Stroget”, approximately 1 mile from the ship’s berth. Denmark produces a wide range of quality products including; porcelain, crystal of classic Nordic design, pewter and silver-ware, amber jewelry and furs. In addition, miniature mermaids, dolls in traditional costurme, candles and wooden carvings make excellent souvenirs.

U.S. dollars are accepted in some of the more touristic stores and major credit cards are also widely accepted.

Value Added Tax (VAT), is added to most purchases. Visitors who spend over a certain amount may be entitled to re-claim some or all of the tax paid. In Scandinavia many stores participate in “Tax Free Shopping”, as for a “Tax Refund Cheque”, this is usually reimbursed before departing the country.

The Post office is located next to the central train station, on Bernstorffsgade. There is a Telephone and Telegraph Office within the Post Office. In addition, there are plenty of phone booths throughout Copenhagen which accept local coins and some which accept phonecards. Phonecards may be purchased at post offices and some tobacconnist, available in various denominations.

The main Tourist information Office is located on Versterbrogade 4! at Tivoli’s main entrance.

Some taxi drivers will accept U.S. Dollars. Major credit cards are accepted in Danish taxis, however, it is advisable to determine the form of payment accepted by the taxi driver prior to entering the vehicle.

There is a frequent bus service operating through-out the City with tickets valid for a period of time and which can be used on any bus or on the subway(S-trains).

The Metro rusn frequently between Norreport and Orestad. The closest station is “Kongens Nytorv”. Tickets for busses and trains can also be used in the Metro.

There are two main train stations within Copenhagen, Osterport Statio on Folke Berndottes Alle, close to the Ship’s berth and Central Station off Bernstorffsgade ( tickets are purchased according to ‘zones’, valid for a certain amount of time, and must be time-stamped on the platform before boarding the train).

Canal boat trips are a popular attraction. There are a number of different tours departing from Gammel Strand and Nyhavn.