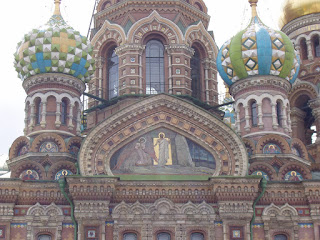 Peter and Paul Fortress was built in 1703 to protect the area from Swedish invasion, and the first site chosen by Peter the Great to build his new city. You can see the former Royal mint and the Peter and Paul Cathedral inside. Its golden spire is tall and slender. It became the City’s first monumental building and the burial place of all Russian Czars. In 1924 it became a museum.

Battleship Aurora is moored on the Neva off the Petrovskaya embankment. It is a veteran of the Russian-Japanese War and its guns signalled the historic assault by Revolutionaries on the Winter Palace in 1917.

Saint Isaac’s Cathedral is Saint Petersburg’s largest church. It is located on the side of Decemberists Square. It was built between 1818 and 1858. It is decorated with 14 kinds of minerals and semi precious stones as well as mosaic paintings.

Hermitage Museum is located on Palace Square. It is one of the world’s greatest treasures of fine and applied art with over 3 million exhibits. This enormous collection vies for attention with the impressive building and its furnishings.

The Russian Museum is located in the former Mikhailovsky Palace. It contains a large collection of Russian Art, some 300,000 examples of paintings, sculptures and icons.

Tsarskoye Selo was known as the Czar’s Village or Pushkin. It is about 17 miles south of Saint Petersburg and the site of Catherine’s Palace. It was built in 1719-1723. It has been restored a lot of times. It has a stunning aqua colored facade, decorated with statues, gold and white ornaments and topped with gold onion domes. Inside is an immense collection of art work and furnishings. This was heavily damaged by retreating German forces. Now, it has been completely restored.

Pavlovsk is located 19 miles from Saint Petersburg. This palace was a former residence of the Czars, built in the 18th century. A more unassuming structure compared with the lavish facade of Catherine’s Palace, its interior is still a beautiful repository of pricless paintings, sculptures and furnishings. The Palace is set in 1,500 acre park.

Peterhof is located on the southern shore of the Gulf of Finland, about 22 miles southwest of Saint Petersbur. Peterhof is also known as Petrodvorets. Peterhof was founded in 1710 as a summer residence for Peter the Great. Altered and extended over the years, it was almost completely rebuilt between 1747 and 1754. There are many gorgeous displays of art, decorative objects and furniture. The Palace over-looks a vista of spreading gardens and fountains.